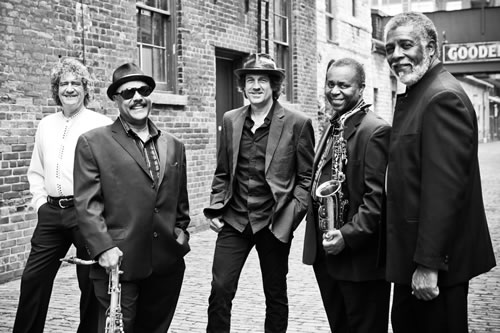 In 2006 LMT joined forces with the world famous Chops Horns to record their "Color Me Funky" CD/DVD in Germany. The album was an international success and led to LMT's European "Soul Circus" tour uniting these two dynamic groups live on stage.

Please contact us for shows and touring opportunities with LMT Connection featuring the Chops Horns!

Over
30
Years of Performing

In musical lingo, to have great chops means you're a great player. Most appropriately, the horn section known as CHOPS are indeed among the greatest players in the world. CHOPS HORNS started out doing recording sessions for a series of Gospel and R&B artists which led to a lengthy stint with the historic rap label, SUGARHILL RECORDS. Next they served as the horn section for THE POLICE's "Ghost In The Machine - World Tour", worked on THE ROLLING STONES' "Undercover", BOB DYLAN's "Empire Burlesque", PUBLIC ENEMY's "Muse Sick-N-Hour Mess Age", CHRISTINA AGUILERA's "Stripped", ALICIA KEY's "Diary Of Alicia Keys", "Unplugged" and "As I AM", MARIAH CAREY's "Emancipation Of Mimi" and on the soundtrack of the movie "Glory Road".